In his two - he feared neither chemotherapy nor surgery. He bravely endured everything 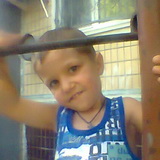 It is terrible to imagine the feelings of 2-years old boy parents, knowing he had cancer, he would get surgery, and his treatment would be long and painful treatment with awful complications: whole body would be shivering and vomiting would not stop for hours. They were worried how he would be able to endure all this? I’d like to tell you about a child, who has pass all this suffering, and has not show to his parents how he had been being afraid for all time of treatment. A small child was able to overcome the struggle for life bravely and boldly, like he would be an adult.

One day life of Barabash family has changed dramatically. Mom, dad and two young sons (Sasha - e was 1 year old, Daniil - 2) went to visit my grandmother. Sometimes Daniiel complained to a tummy ache in his side, but the pain became unbearable during that trip. His parents went to the to the Children's Hospital of Nikopol to the pediatrician. Ultrasound research showed that boy had a terrible disease - a large tumor in the liver. A doctor said that treatment should be started immediately; the boy should have surgery as quick as possible.

Mother and son were transported to the Dnepropetrovsk regional hospital (Kosmicheskaya str., 13). The boy was hospitalized and surveyed immediately. Chemotherapy was started without an accurate diagnosis; it meant that the health of the baby was too critical. And soon the boy diagnosed with formation of irregularly rounded, heterogeneous structure 107-98-150 mm in the right lobe of the liver and metastasis - in the lungs on both sides of multiple hyperechoic rounded education 3-10 mm. Lately Natalya Barabash (Daniel’s mother) explained how the family passed this life test. She told: “All the treatment took about a year. Daniil got 4 blocks of chemotherapy before surgery, and 5 blocks after. Sometimes chemotherapy passed quietly, but it was very rare, more often son was sick, throwing up, it was incredibly hard. Daniil has become so weak, barely walked, kept asking me to handle. After our transportation to the National Cancer Institute (Lomonosov str., 33/43; Kiev), surgery was postponed. Daniil felt very bad, coughed, gasped, he did not stop vomiting, so surgery was postponed for several times. Totally we were in Kiev for 4 months. During this time we could go home to warm clothes, but we couldn’t have a rest at home, spend time with our family - because we had back urgently to the National Cancer Institute.

Finally, Daniil had surgery in November 2011. At the hospital, Daniil didn’t worry, didn’t fear. He knew he would have the surgery, he prepared morally for it. We said him not to be worry. We said that now the main task would be to cut off tumor, recover and go home healthy. And, you know, I did not notice that he had been afraid very much.
He endured all courageously. Of course, we tried very hard to help him, made him fun, bought toys, tried to please, but - had claimed that he would win, and all would be good.

After the surgery, Daniil has quickly recovered! He spent only a week at hospital. Doctors told usual recovery time after such surgery is 2-3 weeks. But he was able to recover so quickly, Daniel general miraculously recovered quickly. I knew that his learning to walk would take a lot of time. At that time he had drains on his sides (devices for liquids removing from the hollow organs after surgery until natural outflow recovery). It was very uncomfortable, but Daniil began to walk very after 3 days of classes. But some days later he could run! Now he and his brother Sasha run around the apartment (mother smiles).”

Mother continued: “It was very important to know we had been supported. Daniil has been visiting kindergarten from his early ages, but before his illness. So, kindergarten director and his upbringer called us and said warm words. There were a lot of people, who had call us, solace… But we cried all the time. I was very pleased the doctors and nurses had treated carefully to him. But in Kiev, frankly speaking, we felt ourselves as aliens, generally worthless people. But in Dnepropetrovsk regional hospital doctors and the nurses are very carefully treat to all sick children, constantly talking with them, making them joy. Such moments helped us to hope.

I'd like to thank everyone who helped us financially. At the first days of our informing bout Daniil’ tumor, at Nikopol’s hospital we had met absolutely strange people, asking us: “Do you have money for the operation?”. We had asked we hadn’t. Then we were advised to go to the charity fund "Nikopol kids”. I called the head of the fund Margarita Gorbanenko, asked for help, and she immediately agreed to help. The surgery cost us about 5-6 thousand UAH. We had heard that we're lucky, that such treatment is usually much more expensive, but for us this amount was too large. Almost all money charity foundation “Nikopol Kids” gave us. I can’t imagine how we could get money without fund.

Thank you to all the kind people who donated money to us.

At home, of course, all family worried very much. The youngest son Sasha all this time was either with father, or with his grandmother. He often sought us out. We were called and told, that he had walked around our home and tried to find mother and Daniil. They were so glad to back home on the eve of New 2012 year already healthy! This is a memorable joy. Today we visit Dnepropetrovsk only for analyzes. Doctors tell that everything is clear and tumor will not be again. Today we get incapacity benefit for Daniil. It’s very good that our state helps. What else to say? Now our Daniil feels strong, healthy child; goes to kindergarten, plays and moves with the other children. At home, two happy, frisky boys run around the apartment and constantly scatter toys.”