To world day of a child with cancer 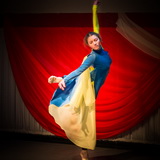 Due to this year events in Ukraine, the problem of cancer patients’ treatments somehow modestly withdrew into the background; but it didn’t become non-actual.

From year to year the number of cancer cases did not decrease. Children and adults also need help and our attention.

This year we have breached a lot of traditions acquired during the Foundation activity time, but a Februaty announced concert "To Live Tomorrow" was not cancelled or postponed; this year we jointed our friends again. Long before February 15 - the day of children with cancer- Charity Foundation with the Department of Education of Nicopol held the children's drawing competition "There is always Hope". Children expressed in their works so magnificent warmth and responsible approach to the canser problem that it was very difficult to choose a winner. Content and technique relevation were the criterion of winner selection.

Last year the pupils of school №12 provided everyone by a gold ribbon with a heart in the middle of it as a symbol of cancer overcoming hope. On that day shcoll pupils took the already familiar places – at the entrance to the auditorium and pinned everyone handmade lovebirds.

Our ward Daniil Barannik, who with his mother had visited our concert, was very glad to get this dove. He is not fully recovered and uses crutches, but cancer has retreated and it is a great joy. David Shoter and his mother visited his event too. And for them we are sincerely happy and wish the boy a full recovery and a happy life.

The children received small gifts from our Foundation and charitable Fund "New life", headed by Natalia Mezentseva. And on the stage the young talents of the city one-by-one shined brightly. This year there was the largest number of concert participants.

Traditionally we are visited by our friends, who help our children from year to year. We joyfully welcomed the city deputies Vadim Kolesnik and Alexander Rybakov, teacher college representativities Olga Pastushok and Elena Yurchenko, metallurgical college representativities, businessmen, teachers, clergy. The two-hour concert passed in a warm and familiar ambience; images to warm our souls and bring a smile or a tear, appeared on the baig stage screen. We thanks for it Victor Zayakin.

To sum it up, during this concert we’ve raised 16245UAH to be used on medicaments purchase for our children. We kindly gratitude for the all who are with us for the sixth time, and to those who just joined. We are waiting for You next year. Wear a gold ribbon, attach a white dove bage and to go us – to honor community of philanthropists and let’s do little, but with great love.