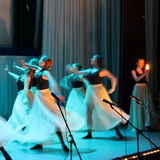 Fourth charity concert "Zhyty zavtra - (To live tomorrow)" took place 19, February 2013 at the concert hall of ferroalloys plant. Such concert holding became a good tradition in our town. All creative teams, talented artists of Nikopol and visitors from Dnepropetrovsk showed by their performance to the cancer -diagnosed children and their families that they are not alone, that they are supported by all citizens.

Talented author, director and concert announcer Irina Lagutina said, that February, 15 is not only The Great Holyday of the Presentation of the God, but this day is also the International Day of the Child with cancer. To this day, for the fourth time in our town a charity concert was held. Concert was organized by charity foundation “Nikopol kids”, Department of Family, Youth, Sports and Tourism of the town government, Nikopol Ferroalloys Plant and the House of Children's Art.

We want the children to be a source of joy and admiration, but not sorrow, so we’ll do our best to save our children from death! We'd like to believe that people in our country will be more compassionate and responsive. This concert was full of love, warmth, and a great desire to help those who need help just now so desperately! Every good deal should begin with God's blessing, so we asked to Archpriest Nikolai Maruschak (the Deaneries of Nikopol churches) for this event blessing.

The priest said happily to the visitors: "I congratulate you on Great Feast of the Presentation of the God!”. I would like to thank everyone who participated in this charity concert, who makes such necessary events. Besides, priest said: “Blessed are the merciful, for they’ll obtain mercy”. Such events let us to think about many things: that love, which begins here on Earth, will never end. This is the main feature of love - love is eternal ... Let us appreciate those who love us, and appreciate every day, which is given us by God. Lets merciful God save us!

Charity concert was full of love and inspiration. Every artist, coming to the scene, gave his/her energy to those who need power to fight with a disease. The concert was opened by the song "We Are Together" by school number 13 vocal ensemble " Neposedy (Fidgets)" (head - Inna Dimitrova). Dance ensemble “Valeriya” (head Margarita Gorbanenko) presented creative performances "Mozart", "Namaluyu Tobi zori (I’ll draw for you the stars", "Roosa Cosa (Fair spit)" and "poka gorit svecha (As long as the candle burns)".

Nikopol’s Mayor greeted visitors and told that his presentations at the events of this fund are the most difficult among his official speeches, presentations, etc. He told that he was extremely grateful to all people, who are presented there and helped to small wards, and created such concerts.

It’s too difficult to understand why our children in peace time leave their lives for some reasons... Now we are trying to participate somehow in their fight against a disease, to create some funds; to make other activity… But result will be if only every citizen tell: "I’ll not let these children to die"; if only we all participate in their fight.

A fund-raising auction for “Nikopol kids” wards was held on Sunday, February, 17 in our town. We and our town officials took part in the event, bought beautiful paintings, drawings, which were sold there. When the auction has been over, we asked ourselves "Have we done all we could? Is this enough?".

Today, as you know, the state and town government do not fully participate in the lives of children, battling their diseases. But there is nothing more important than human life, especially the life of the little kids ... Nikopol’s Mayor sincerely empathizes to this problem and his eyes teared. Me and my colleagues – deputies have been discussing how we could help children in need of emergency medical care, especially for children, who had no financial resources for such assistance. Any way, we’ll do our best to save children’s lives. Just one children saving means that we worked for 3-4 years not for nothing. Once again, I urge everyone to join this campaign. Let's all going to help save lives!

Concert announcer said that the most important wish for sick kids is to get well and hurry back home. She invited to the scene the woman, who really lived by every day problems of this children, gave a lot of time and efforts to the charity. Slogan “We a doing a little, but with great love” became the sense of her life. It’s a director of charity foundation “Nikopol kids”- Margarita Gorbanenko.

Margarita Nikolaevna said: "Every time we are pleased to invite you, our friends to charity concerts, we are always happy to see you here, and we want to promise that we’ll only work for benefit of every child, for every starting life. I urge all of you to join us and become our ranks”.

The works of well-known Nikopol artists and 2 works of sick children were exhibited at a fund-raising auction. Our ward Ivan Timoshenko on his own initiative took part at a charity auction for the second time. You just can’t imagine that his works were sold like the hot cakes! And, Vanya despite of that he is being treated, did not took money for picture sale, but donated all the money to the fund for the children who need help. Let us follow the example of Vanya, we have found in his face a good friend! But, there are a lot of children, who can be a sample! Our wards Luba Fomina, Yulia Bugaeva, Sasha Kravchenko have beaten a disease. Our kids from Nikopol are the strongest, most courageous children! And we’ll beat a disease!

Vocal performance of the “Spivocha rodyna (Songing family)” contest winners - Marushchak family - became the real discovering of this concert. They presented the song “Vyidu noch’u v pole s konem (I will go out at night in a field with a horse)”. The perfect actor’s performance by the theater group of House of Children's Art "Bolshaya Peremena (Big Break)" (head Irina Lagutin) was really impressive. They presented the creative performance of the part of well-known and appreciated by millions people work “Vasily Terkin”! Sophisticated dance "For Elise" was gifted to the viewers by the dancers from Dance Company "Premier Classic Grace" (leader Anna Streltsova). A small Ukrainian contest "Minnie Mr Ukraine" winner Daniil Kondratenko impressed all the grown-ups by acrobatic tricks complex in the creative performance "Syshchik Dan (Detective Dan)".

"It is glad to know that for the time of "Nikopol kids” existing we have get the regular contributors” - said Irina Lagutina. We are sincerely grateful for the help and support of the German citizen, businessman Кristof Reiva, organization "Nikopol path of the way" private company "Security Systems" and many other caring citizens. Besides agricultural college delegate volunteer Valentyn Koval made a speech.

He said: “From all of our college student council, we want to wish sick children a speedy recovery! We are very inspired by Vanya Tymoshenko action, because it was the act of a real man! We all need to take him as an example! Let's be more proactive and do good deeds. The students of our college would also like to add a little bit to help the charity foundation wards”.

Guests from Dnepropetrovsk, who have came to Nikopol with Dnepropetrovsk regional children’s clinical hospital (Onko-departament) volunteer, actress of Dnepropetrovsk Theater Elena Volodina, demonstrated their talents to the Nikopol’s citizens. Virtuoso musicians from accordion duo "Monte Carlo" Constantine Ivanchenko and Sergey Zhorov won over the audience by their inimitable charisma. After that it was Dannil Lysenko with a spectacular number "Juggling" performance. But entrancing illusion with candles was demonstrated by duo Alexander and Natalie in the creative performance "Candles". Beautiful vocal songs were gifted to the visitors by the winner of the first prize of Kobzon award Zinaida Chepa.

Flight of their dreams was demonstrated by the House of Children's Art choreographic group "Fantasia (Fantasy)" (leader Elena Snychenkova) in the performance "Fantasia on Mozart’s Theme." Finally, all the creative teams, gathered together, joined to the enthusiastic song “Guardian Angel” of House of Children's Art vocal studio "Rin Sen" (head Irina Kowalskaya)". Let all of us will be covered by the grace of his Holy wings!

All money, accumulated by the tickets selling and donation during concert, was focused for Charity Foundation“Nikopol Kids” wards, which have been being on treatment. During this event, every person could make his/her own contribution to the donation boxes. Moreover, members of the acted artistic groups also donated to disease-fighting kids.

Coming out from the concert hall, looking down from the second floor to the glade, visitors could see candled words “НАДІЯ Є! (There is a hope)”. Everyone could join to the candle action; willing people could buy candle-lamps and laid these words on earth to share a piece of their heart with young fighters of our town. The words were burn by flame of hope and inspiration, flame of our strength and unity...

How can we name the situation, when all creative teams gathered to help the families with cancer diagnosed children, the concert hall was full of visitors, officials of our town put off all their deals to visit evening concert, when Mayor’s eyes were full of tears for the pain of the suffering children?

It was the sign that struggle with cancer in our city has already begun, wasn’t it? Was it a sign of that we would not leave our dying children alone with their disease?!

Now we have several charity foundations, which fight with these children for their lives from the terrible cancer disease. Today all citizens are thinking about the way they can help, everyone thinks personal about contribution to children, who can be on the brink of life and death. Nikopol!

We have already gone to the warpath, so now we had not turn back from it, run away with indifference, and defended to the end. And this way – we’ll win!