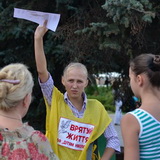 On August, 18 and 19 charity marathon to raise funds for Anastasia Shovkuty was held in Nikopol. Nastya met with a car accident and she is being now in intensive care department of Dnepropetrovsk regional children's hospital (Kosmicheskaya, 13).

For three weeks she has been being in a coma, but, thank God, she does not breathe through the respirator, but she does it herself.

A week ago, Nastya’s friends asked to foundation with the initiative to girl treatment fund raising.

It was decided to hold a fund raising marathon.

Every participants of the event gave seven hours of his/her time to help Nastya’s family to cope with material and moral difficulties that had fallen on them. What about time? Every one would gave his/her part of heart to this trouble quickly left the Nastya’s family.

The first day it was one big donation of 1000 UAH from our constant helper and we could collect 1262 UAH. On the second day we collected 1344 UAH in cash-boxes.

Totally we have collected and transferred to Nastya’s mother account 4211 UAH, including money held from “Mercy day” action. We beg to support the family by money, because Nastya state of health is serious but stable. Only God knows how much medication and nursing facilities she will need.