Despite of all event, dedicated to the day of a child with cancer, passed away, all our action were reported, but work is not diminished. Just after charity concert on February, 15, all our forces were directed to the "Procter & Gamble Ukraine" grants distribution and delivering. Now a little more specific about this: 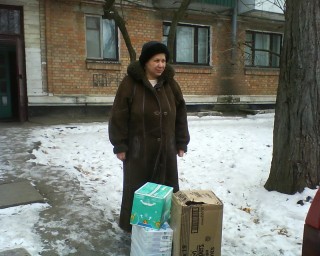 In January, there was an unusual call. They did not ask for help, but offered. Svetlana Oleksyuk, who works at "Procter & Gamble Ukraine", called and asked about Zhivotov Dima. She saw information about him at our site and wanted to help him and his mother. As far as diapers for Dima produced by this company, they were donated. But with diapers it was donated: a lot of a huge treasure of washing powder, detergent, rinse aid and different kinds of diapers.

We were very glad by such gift, because any money economy for parents with critically ill children is huge. And we thank the good people who do not forget that charity is the sacred duty of every citizen our country, of every Orthodox Christian. We allocated this donation to the bed-patients children with the great pleasure; to the family, which took kids, which parents were burned (information about this tragedy was presented at the newspapers in January); to Natalya Popovich with her little son, who were left homeless; to Nikopol children's hospital; to maternity home; to Oncohematology department of Dnepropetrovsk regional children’s hospital; to David Shoter, Kseniya Galchev, Valery Ivanov, Nikita Zykov, Daniil Barabash, Sosnitsky, Cherniak families. All, who have received the company's products, thanked very much; it was the real pleasant unexpected surprise.

In January, our ward Valery Ivanov got rehabilitation course at the doctor Kozyavkin’s clinic (Truscavets) with the support and partial funding of the foundation "Likar.Infund". Our friends from Kiev took our child in the program "To live means to move" and the kid in this program will take courses of rehabilitation constantly.

We are searching for a clinic in Germany for Dima Zhivotov. Such patients are considering as not perspective in our country. But Clinic «Heleos» in Berlin can take the child to treatment, but it needs 25000EUR. Now it is the correspondence with the clinic.

Danya Barabash has completed treatment. He is a child, who struggled with a diagnosis of hepatoblastoma. Foundation allocated him 8669UAH.

Sasha Lozovoy back to treatment with relapsed disease. The kid will have not mate bone marrow transplantation. It is the first case in Nikopol. The Foundation has purchased for him medicaments in January in the amount of 1500UAH, but today foundation transferred 25000 UAH to transplantation. With the help of our partners, advertising and printing company, "Coloryt", it was designed and installed billboard for help to Sasha.

To our beauty Yulia Bugaeva it was donated 10000 UAH for foot inflammation removing surgery. We thank to the charity foundation “Nastenka” for its love and helpful hand.

Traditionally, the February events were aimed to the oncology Department of Dnepropetrovsk regional children’s hospital assistance. But this year our children’s needs were very "weighty". Therefore, almost all the raised funds at charity events, were not transferred to the new equipment purchase, medical treatment improvement as it was planned, but to medication. It was purchased medicaments on 21500UAH for oncology department. From 58315 UAH it was used 56500 UAH for medicines purchase.

I’d like to repeat again and again: "The Foundation is we together, dear donors!". Your money, wishes and prayers save our children. This string of good runs quietly but steadily, attracting new people to its ranks, changing the world, awakening in man true - the love of neighbor, given us by God.

Again, we are starting a new series of events that will be ended on February, 15, 2013. We are preparing the new projects. We have some very interesting ideas from Vitaly Dmitrievich Valsamaki, which we consider with friends from Odessa now. Besides, revenues to the fund become increasingly; "Circle of Friends" became wider, we put our box for donations at another church. On weekdays, it is in the Temple of Mother of God "Joy of All Who Sorrow", on the territory of tuberculosis prophylactic center.

There was a box in the pharmacy at Zhukovsky; every the 15th of each month it will be held "The Day of Mercy". Volunteers are waiting for you at the supermarket "Varus" from 16 to 18 o’clock.

I would like to appeal to all and to remind that the foundation not only attract aid, but also provides it. We are confronted with the fact that, sometimes, people do not need much, and they're embarrassed to ask for themselves. Do not be shy. Please contact if you are in a difficult situation, we will try to help.