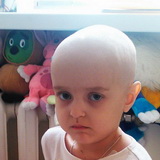 The child's condition deteriorated, inflammation on the buttock repeated, there is necrosis on the arm and on the side. Mother does ligations. The tests options decreased dramatically, level of platelets is close to zero, and leukocytes despite the every day stimulation did not rise at all. The child ate nothing. Mostly she was sleeping, he had a high fever.

The bone marrow was so depressed by chemotherapy that didn't react. At this time she was additionally treated by intensive therapy, prescribed new antibiotics, antifungal, and immune preparations like Actovegin for microcirculation and blood circulation. Two weeks later she got a little better, her general condition and tests increased. She was tearful, irritable, all were sick.

Chemotherapy course was canceled, and at the moment she has completed the first chemotherapy block and waits allowation to continue chemotherapy and after that Vika will have surgery on the buttock (a very deep wound that doesn't heal).

Victoria feels better, she smiles, draws, sculpts clay, finishs to study letters, knows numbers and loves to listen the books to be read to her, and puts puzzles together. During the treatment time she very grown-up, now she knows all medicaments she gets, helps to raise funds for drops and injections, monitors her mother to don't forget anything. The girl is waiting for the first chemotherapy block finishing, surgery. After that she will have a small vacation with dad and sister. She is very tired from the treatments, wants to go home and misses all.