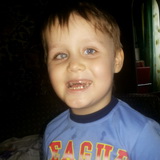 From a letter of Mother of David Shoter:

First of all, I and my children would like to gratitude for help and support of my son David. Now my son is being on rehabilitation in the center "Orla". David is has been being there for 1.5 months. He takes massages, hipotherapy, sessions with a psychologist and general developmental classes.

Then it will be two months break. Dolphin therapy and rehabilitation courses gave the great impetus to the development and restoration of son. At home he moves by himself, but not outdoor- he needs adult’s help nearly.

His right hand became more managed; of course, it is difficult to control the small things, but he tries to draw, to trace stripes, to connect the points, but draw by the left handle.

He began more to speak, he sings songs, sing along with somebody. The situation with the eye does not change. The pupil reacts to light, we drip it, irrigate. He is getting treatment. In July 2014 he assigned for another course of therapy.

We hope to help of good people.