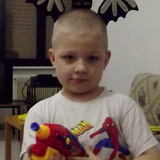 Alex is doing well. The first week of chemotherapy is over. Blood values has decreased but remained within normal limits. Immunity has also fallen slightly. It's 0.8 now.

Today the boy has almost overeaten tablets of supporting chemotherapy: he's eaten six pieces instead of one half. He says they're delicious.

The treatment plan for next week is the same. On Monday Alex is being inspected, measured his pressure, weighed, anesthetized and done chemical injections in the spinal cord. And then four days later he's receiving a dropper.

For two days the mother puts Alex for a nap in the afternoon. She reads him stories and he falls asleep.

Alex's mood and behavior are as always. A few days ago he'd painted with marker the seat in the game room, and his mother had to wash it afterwards. Our hero is friends with Natalie. She, unlike the boy, is a calm girl, but they find common ground. Children play with toy dish, Alex pretends pouring her coffee. She embraces him for that. The girl has learned the Russian words "Сашенька" and "хулиган" ("hooligan"). Let me remind you that Natalie is from Georgia and does not know Russian.

Tomorrow Tanya and Sasha are going to buy a toy for him. Money for this has been collected by members of group in "V Kontakte" (the social network). Tanya doesn't want to spend the whole amount at once, she wants to buy him something else later.

Friends, thank you for being with us!