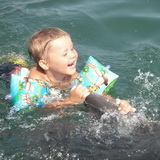 This year, David has been swimming with the dolphin, named Iva. She is 3 years old, and she is very playful, compared with Mac, which David was swimming with last year.

The first sessions were held at 3 pm. It was quite uncomfortable, because David was sleepy and cried. When the session was brought forward to 11 am, the meetings with the dolphin became a delight and a game!

Like last year, David has got some changes in speech. He has started to say difficult compound words.

At home David's mother noticed that he was trying to stand by himself without help of the sofa! It's amazing considering that the real results of the dolphin-therapy are expected much later, after about 6 months.

The result of last year's dolphin-therapy was incredible! The memory and the speech especially improved. David began to walk by the hand, and most importantly - he showed his character!

We are looking forward to even greater results!