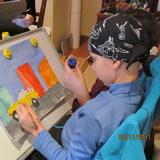 Vanya Timoshenko comes back home after having finished his treatment. Both he and his mother haven’t been home for a year. We are really happy for them and wish Vanya to recover after treatment as soon as possible! This is amazing! Vanya is our second hero (Danilka Barabash was the first one).

On his way back a lot of wonderful things happened.

Straight after leaving the hospital the whole family headed to Goloseevskiy monastery. On their way there they decided to visit Feofaniya and that’s where a miracle happened. To their surprise they met a priest in a wheelchair.

The fact that the priest was accompanied by several body-guards made it clear that it was not an ordinary priest. As Vanya and his mother approached him they saw that it was His Beautitude Vladimir, Metropolitan of Kiev, himself. He blessed the boy and that’s how the boy started his way home.

For the next 24 months Vanya has to undergo some supporting chemotherapy in Dnepropetrovsk hematology department.

We cannot describe how grateful Vanya’s parents are to all those people who helped to save their child’s life. Not only did they provide financial help, but also sincere empathy. They went to monasteries to pray for Vanya. Right now we can say that Vanya has managed to overcome this terrible disease. Now comes rehabilitation and a new life.

We wish you all the best, dear Vanya! Thank God for everything!