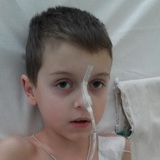 Maxim was born a healthy child; he grew up like all other children. When the boy was 2 years old, his parent noticed he had vision problems. They consulted a doctor, who addressed them to the Dnipropetrovsk regional clinical ophthalmology hospital. At the hospital the boy was diagnosed with "Congenital anomaly of the optic nerve head, intermittent exotropia eye" and his health condition was defined as disability. Since that time Maxim wears glasses, and every year he takes vascular and vitamin therapy, as well as special treatment.

Doctors did not recommend him physical activity, but it's impossible to explain to the child, who loves football since he was in deapers. Maxim visited football classes, he played for the school No. 9, was engaged in climbing. Generally, he is a sporty kid.

Later, all problems started with the usual appendicitis suspecting. Maxim had a lump in the groin; he was transferred to Dnepropetrovsk by ambulance. There were doctors councils, X-rays, ultrasound, CT scans, but diagnosis was not determined and doctors decided to “see” through the navel by camera to see exactly what it is.

It was a tumor (size about 10 cm)... and Thank God! Doctors managed to remove it but with a piece of intestine. After that that the child spent 5 days alone in intensive care unit, then he was transferred back into the surgery department. Histology results were not as expected; later the child was transferred to the Hematology Department.

The tests were sent to Kiev to confirm the diagnosis. The boy diagnosed with Burkitt's LYMPHOMA and prescribed for chemotherapy treatment. Treatment started with a bone marrow biopsy from the spine (previously there were chest and thighs biopsies) and medicament infusions.

Maxim was very painful, he was crying in the manipulation room, but his mother was crying outdoor.

Later there were endless drips (so-called "washings") with chemotherapy medicaments, hormones, glucose, and saline-solutions for 5 days and final testing. The first chemotherapy block began on February 3. The treatment will be long and costly.

We will be very grateful to everyone who responds and will take part Maxim treatment!

ANY HELP IS IMPORTANT!

You can donate by money transferring to the bank account of charitable foundation “Nikopol Kids” stating the reason “Maxim Hilobochenko Treatment”. 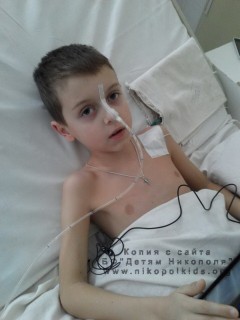 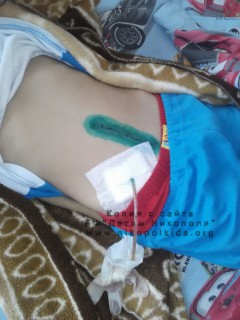