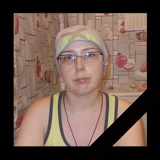 On 08.09.20144 our Anna has left us. Anna was passing her 4-th chemotherapy block in Cancer Institute. Her heart failed a terrible burden. Neither resuscitation means, nor something else could bring back to life our Ann. The Kingdom of heaven to you, Anya and eternal memory!

Before Anna was diagnosed with lymphoma, a young woman had guessed about her seriously illness, but she had been afraid to admit it to herself.

After mediastinum and abdomen MRT in Dnepropetrovsk Multidisciplinary Clinical Hospital №4, thoracic oncology surgeon informed her about hospitalization and preparation on the operation to capture material for a biopsy.

On 19.05.14, Anna was hospitalized to the Dnepropetrovsk Multidisciplinary Clinical Hospital №4, she was tested there, had drips to maintain heart because of anemia, low blood pressure and tachycardia, and the operation was planning to be with General anesthesia.

In Dnepropetrovsk on 28.05.14 it was done the video - thoracic surgery, biopsy of paratracheal lymph nodes. Hodgkin's Lymphoma (IA grade) was diagnosed. It was spent a lot of money and Anna back home.

The doctors had said, Anna had no time – no more then a week. Friends, relatives and doctors recommended checking the diagnosis at the National Cancer Institute and get treatment in Kiev.

And only in Kiev National Cancer Institute after test and checking, it was diagnosed with Classical Hodgkin lymphoma, nodular variant of multiple sclerosis, IIIsВ stage appointed a regimen of chemotherapy.

Classmates of Anna and her husband, co-workers, Anna and her parent’s friends and others helped her to collect money for 1 chemotherapy block. People, who had known Anna, strange people, who had known about her grief, transferred money to her bank account as much as they could. It was great help from the National Cancer Institute patiens, psychologist Marina Aleksandrovna helped her psychologically and financial: she had found the sponsors, who came to the hospital and gave money and medicaments. At the end of 1 chemotherapy block, Anna did not return home due to the recovery, which needed the money. Because of all the difficulties she was going to give up...

Her organism endured the treatment rather bad because of aggressive chemotherapy block. In this case organism usually gave up after 4-th chemo therapy from a block, so it was necessary to raise the cells by injections, to transfer blood (after first chemotherapy block), antibiotics helped to reduce the temperature to 39.

It was appointed generally 6 blocks of chemotherapy, each of which is 14 days long, after a course 4 days minimumally is spend on restoration until patient leaving home. Now Anna’s family urgently asks financial assistance from all organizations and friends.

Our Foundation has helped her in the purchase of medicines for the third course of chemotherapy. We will continue to help Anna to cope with her disease. The Anna and her family is grateful to everyone, who participates in financial aid to fight with severe disease. Thanks to these people, many of whom were very close, she began to feel needed and happy.

We ask our donators to support Anna and her family. Assistance can be provided to the settlement account of the Fund specifying the payment purpose "Charity for the treatment of Hnykina Anna". 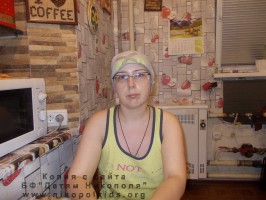 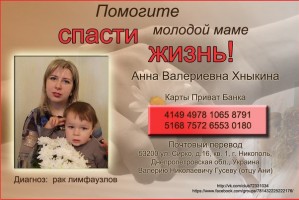