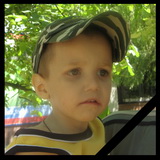 We memorized our Daniil Barabash in such way. It was the first ward of our Foundation. Cancer decease - hepatoblastoma gave no chance for full recovery.

For all time of my working for Foundation, I have never seen a greater affection of the father and the son. They really wanted to win, but today 26.03.2014 Daniil has left us…

Diagnosis: Malignant tumor of the liver

Our new ward was born on Great feast of the Nativity of the blessed virgin Mary. He is a small, brown-eyed man, who had just started to live, visited kindergarten №54, played, in general, like all children. Dania. Danya.

Nimble as all the kids. Child before the Easter holidays began increasingly to hold the right side, began to be tired, and when the family was visiting his grandmother in the village, Danka [Daniil] became ill. Parents paid attention to the increased belly and hardening in the region of the liver.

The boy was immediately showed to pediatrician. And, as it often was, the worst disease was not immediately suspected. Very large tumor in the liver was revealed by ultrasound. For further diagnosis the boy with mother were directed to Dnipropetrovsk regional  clinical hospital, where they were immediately hospitalized to the Department, they was done a biopsy and the material was sent for histological examination.

At the moment the diagnosis is being on confirmation, but oncologists have no doubt, that it is the malignant neoplasm. The situation is so serious that the chemotherapy was started without an accurate diagnosis, and this is done in a case of a threat to life.

In Daniil’s family there is another baby, and mother is really torn between Daniil, who need special care and fully Mama's free and not free time, and the baby. Dad works at the enterprise Nicoclub, the mother care for children.

Heavy imprint laid on parents the trouble with their baby. The treatment will be long and serious, requiring large expenditures. Despite of family efforts, they can’t cope with your help. Good people have transferred to the card account parents $ 200, but it is will not be enough for a long time.

Basic medicaments at the Hospital’s Department. But besides, it is necessary to have hygienic facilities, good food, vitamins, milk, fruits, and trips from home to the hospital.