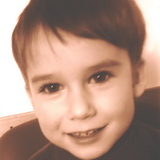 Thanks for the help, the treatment is over!!! Help requests are closed!

The child is being sick since his 3 months age, when parents noticed the right limbs movement limitation. The kid didn't take toys by his right arm, and he was passive.

Nobody could imagine something bad or terrible, so parents decided he would be left-handed child.

But parents still consulted a neurologist, and Artem was preliminary diagnosed with right-sided hemiparesis. It was very hard to believe because the boy was lively, active, without problems.

The neurologist directed Artem to the Dnepropetrovsk children's clinical hospital, where he was tested and diagnosed with consequences of cerebral infarction and acquired polycystic post-hypoxic of temporo-parietal lobes of the brain on the left.

The whole family of the baby was shocked. On 07.02.11 Artem was hospitalized at the Neurosurgery Department for surgical treatment, and on February 22 neurosurgeons successfully carried out the operation. But, it was not a final of problems, because now Artem needs a long-term rehabilitation, massage, physical therapy, speech therapy.

After rehabilitation course child's condition became essentially better: he was able to speak clearer and more, to use his right hand, to care himself; his posture improved.

Artem needs a regular rehabilitation, the next one should be hold in early February next year, and it requires a lot of costs.

Artem is bringing up in a large family with 3 children except him. The family is not able to afford expensive treatment.

Charitable Foundation "Nikopol kids" and Artem's family appeal to all caring people to help in the treatment of the boy. You can donate by money transferring to the bank account of charitable foundation “Nikopol Kids” stating the reason “Artem Olunin Treatment”.