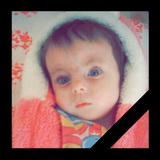 The baby born in the hospital of Ordzhonikidze-sity with 2300 grams weight. As baby’s mother said, the pregnancy had been normal, ultrasound and other tests had showed no problems, but the child had been born unhealthy with multiple congenital anomalies.

Two days the child was in a special cell for babies, he didn’t eat, and then he was hospitalized to the neonatal center of Dnipropetrovsk clinical hospital No 3 to the Department of newborns pathology in moderate severity condition because of syndrome of increased neuro-reflex excitability.

Here the baby was fed with glucose, later doctors tried to give her a baby feed, firstly she ate no more then 15g; and then she ate more, but she got weight very poorly. She was diagnosed with multiple congenital malformations – MCM, pulmonary hypertension, radiation clubhand, malformation of the vertebrae, CNS Syndrome, Holt-Oram Syndrome. Because of treatment and nursing, the child’s condition became stable.

After a two-week being at the hospital, Anastasia with her mother back home. At home, the girl had a good appetite; she ate 55 ml 8-10 times a day. But 2 weeks later, Anastasia was admitted to the hospital No. 3 in Dnipropetrovsk with SARS. Again, the child did not eat; sometimes she ate only 60-70 ml for the whole day.

The babe was tested and lot of medicaments was prescript. Additionally to other diseases, the girl was diagnosed with right-sided diaphragmatic hernia. As far as it is not bothering the girl, doctors said it was no sense to operate. At that moment the doctor orthopedic surgeon from St. Petersburg- Golyana Sergei Ivanovich (who comes here twice a year) -was being at the hospital. He consulted the child after examination and said the right hand would be operated to be like the left hand. He said a surgery treatment would be appropriative no early then the girl turns her 1 year; perhaps, the girl would need some operations with approximate cost of $ 2,000. 15 days later, the girl was discharged home with the recommendation to be examined and consulted in the Krivoy Rog Medical-genetic center and the Orthopedics Department of the Dnepropetrovsk children clinical hospital.

On July 08, 2015 the baby was transported to the Orthopaedics Department of the Dnipropetrovsk children (Kosmicheskaya, 13). Transportation was assisted by the Deputy of city Council, the head of Public organization "Gromadska Syla" Kolesnik Vadim Gennadevich. Anastasia’s family thanks him very much for it. Here upon the examination the girl was found bilateral hip dislocation and prescribed the Freyko pillow and Pavlik's stirrups usage for hip joint fixing for 6 weeks. After that the girl should be consulted and if all goes well, these devices will be removed; if not- she will use them to 1 year.

In August, 2015 Anastasia and her mother went for a consultation and an examination in the Medical-genetic center of Krivoy Rog. The mother has not yet received the survey results. And here again they have to go to Dnepropetrovsk for an examination, the young mother has no money for their trip at all. Money she get for children are spent to buy diapers, wipes, baby feed, etc. Baby feed cost 128UAH per a jar and spend for 4.5 days. She has no money to get to Dnepropetrovsk, especially the child is transferred by a taxi because it is not impossible to transfer a so small baby by a bus or by a train. It’s really expensive.

Doctors of the Krivoy Rog Medical-genetic center diagnosed the girl with the Edwards Syndrome. This is a rare genetic disorder associated with multiple abnormalities in the brain, heart, stomach, kidneys, musculoskeletal system and the craniofacial structure. Doctors said she would be able not to live up to her first year of life due to this disease.

Anastasia folks are very upset and worried for the baby. She eats so poorly because of poorly developed sucking reflex. We hope with proper care, constant supervision and with God's help baby will live and she will be fine.

We ask our supporters to help Anastasia and her family. You can donate by money transferring to the bank account of charitable foundation “Nikopol Kids” stating the reason “Musienko Anastasia Treatment”. Payment details of the Foundation: 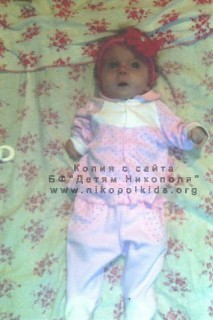 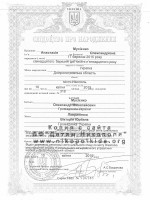