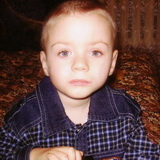 The child was born severely preterm, a child with a disability since his birth with gross violations of the Central nervous system. He was consulted in Lviv Department of Pediatric Clinical Advisory polyclinic hospital (OHMATDET), surveyed in Medical genetic center and was diagnosed with psychomotor development delay.

Two-years old boy was admitted for treatment and examination in Neurology center of Dnepropetrovsk children clinical hospital №5, where he was diagnosed with spastic paraplegia with emphasis on the left side with persistent motor impairment, gross psychomotor development delay.

Alexey does not speak, can not walk by himself – only with the help of adults and to a small distance, and so it is necessary to carry him in arms or use a wheelchair. From his birth, the boy was adopted, by the grace of God he was not became an orphan without mother and father. In the family there are two youngest boys.

Twice a year Alexey is is being treated in a rehabilitation center "Orla", and once a year in “Hadjibey”, Chkalov specialized sanatorium in Odessa. Because of this, he began to walk with adult’s help and his condition improved a little. Mom of the boy pleaded us to pay for the rehabilitation course of dolphin therapy, needed for child.

After reading all the positive posts about Dolphin therapy Centre in Kharkov Dolphinarium "Nemo", we contacted them. Head of the center Elena Evgenievna Kushnirskaya made an appointment with the course from December 1 to December 12, 2014 and recommended with Dolphin therapy sessions to take classes with French Tomatis method.

Some words about this method: it is based on sensory stimulation. Through specific designed headphones, the patient listens to the special treated melody. Its effect is based on the alternation of intensity and frequency of sound and because of this instability ear is in constantly working condition.

Sound vibrations, passing through normal ear canals, converted into electrical impulses, and they, in their turn, stimulate the cerebral cortex. The signal must be verified, correct: only in this case, the brain gets a good workout and responds to positive changes almost immediately. Depending on the original condition of the patient, is selected the program and frequencies, that will be potentially effective and secure. Expected effect of this method usage is in speech skills improving, voice and small and large motor skills.

And now Alexey with his mother returned from a rehabilitation course with a lot of positive emotions. According to his mother, Ilona, her son overcame everything normally, the only exception was the 2-hours Thomas therapy passing, which made Alexey tired and he could not sit all time on his place. So, it had something to do with the child, he could play all kinds of toys, draw, but there were moments he wanted to take off the headphones. And, of course, he was.

And of course he talked with the dolphins, touched them by hands, legs and head, rode on them and swam, he really liked the psychologist Eugene, who worked with him, the boy always smiled and was happy at the sight of Eugene. His mother mentioned the changes in child activity after therapy course: he became calmer, stopped to twist his arms, started to make some sounds, and this is very good. We are happy for the boy. The family expressed gratitude for his assistance.

Alexey mother presented us photos and videos from the course of Dolphin therapy. 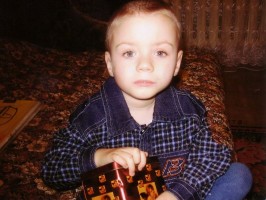 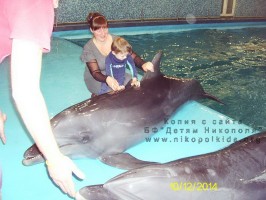 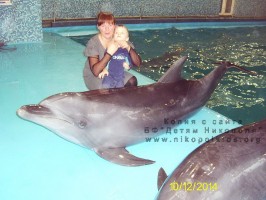 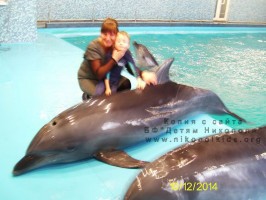 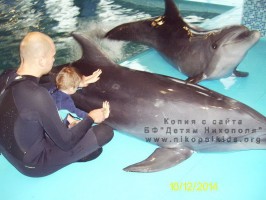 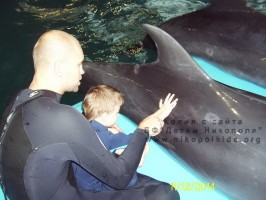