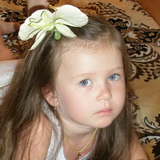 Timoshenko Masha was born on the 9th of June 2009 as an absolutely healthy child. Maria was growing as an ordinary girl untill she was one year old, but with a small retention. By the time she was 11 months old, she began saying her first words: ma-ma, pa-pa. At 11,5, as a result of unsuccessful vaccination genetic abnormalities appeared in the organism, and consequently metabolic disorder developed.

Following that, a regression in Masha's development had appeared, her communication skills and her vocabulary had disappeared.

These changes were noticed immediately Her parents would not sit back, and wait for the problems to correct themselves Although there has been constant assessments and rehabilitation courses taken, Masha has shown little progress.

Her disorder is not a well known one, so much of the treatment is chosen by trial and error.

Right now Maria is almost 5 years old, she is unable to speak, can not care for herself, and struggles with following simple instructions. but there are not enough funds available to provide her with proper treatment.

Maria needs your help and support, PLEASE help her to have a chance at having a bright and happy future, as well as being a contributing member of society

Help can be provided by any donations to an operating account of the fund, mentioning payment reference "Charity help for Timoshenko Maria Olegivna".

Payment details of the fund: 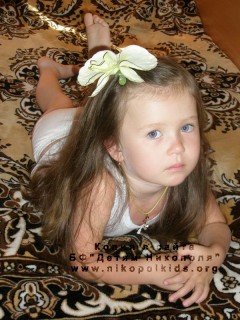